We are expert in digital media and game production.

We love human interaction and
we believe playfulness is a powerful way to bond.

We work on our own products but we also design and develop high quality projects websites applications interactive installations games prints for our clients. 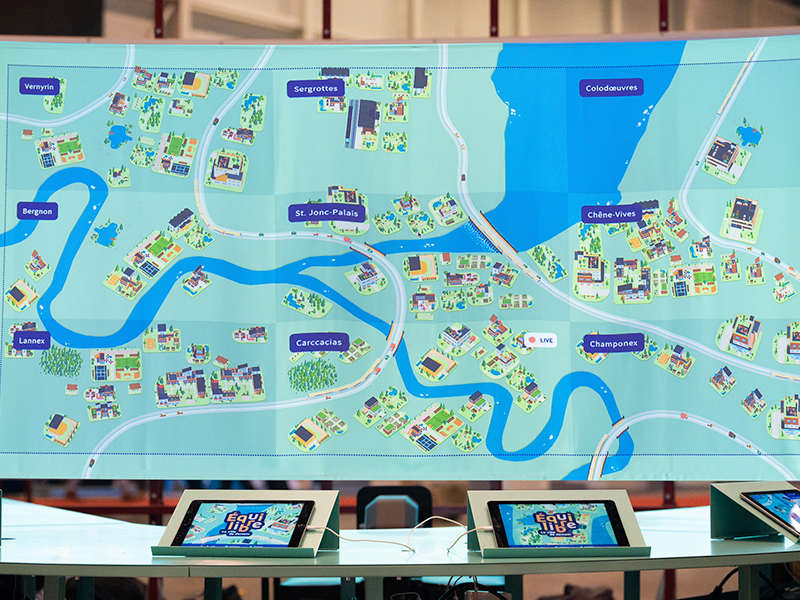 Co-plan a fictional version of Geneva with 5 players simultaneously!
Équilibre - Ville de Demain, invites players to build a district of a fictive version of Geneva in multiplayer mode.The game features a vision of the city based on values such as sobriety and solidarity. The gameplay is about positioning buildings in the limited space of a district by making good associations to obtain the best possible score!
This game was designed and produced in collaboration with Ta-daaa Studio and with the support of the HES-SO Geneva as part of the Cité des Métiers (Palexpo, November 2022). Our studio was in charge of game design, UX, editorial, programming and 3D production. 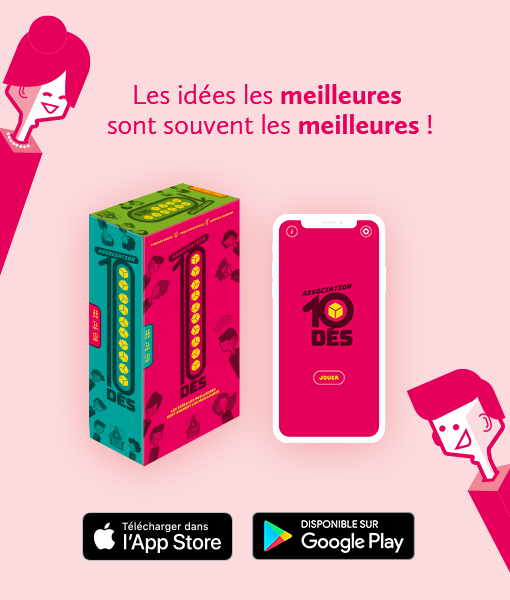 Companion application for the game 10 dice published by Act In Games.

The app is used as an intelligent stopwatch! Players can activate it and indicate which team is playing. During a round it is possible to switch from one team to another. And if a team doesn't find the idea, the application grants a time penalty for the next round.

Tourmaline was in charge of the design and development of the application.
Download the app
2-8 Players
1 Smartphone 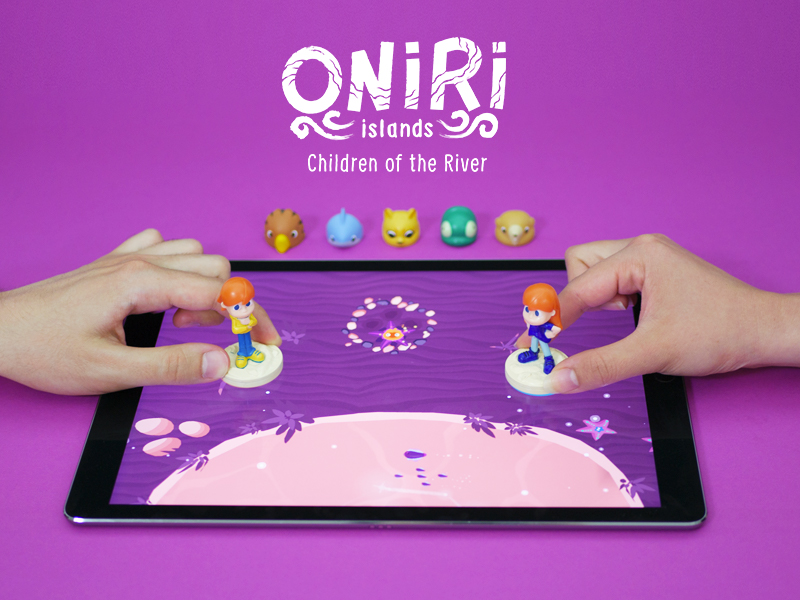 Children of the River

Oniri Islands is a cooperative adventure game for two players. You play two kids lost on a mysterious island, searching for their shadows. They are helped by animal masks giving them magical powers to survive. Mina and Tim, the heroes, are two smart toys connected to your tablet. Move them on the screen to explore the fabulous world of Oniri Islands.

Oniri Islands is a gender friendly game where toys magically come to life!
The game is made for kids from 6 to 66 years old, families, friends and adventure game lovers. 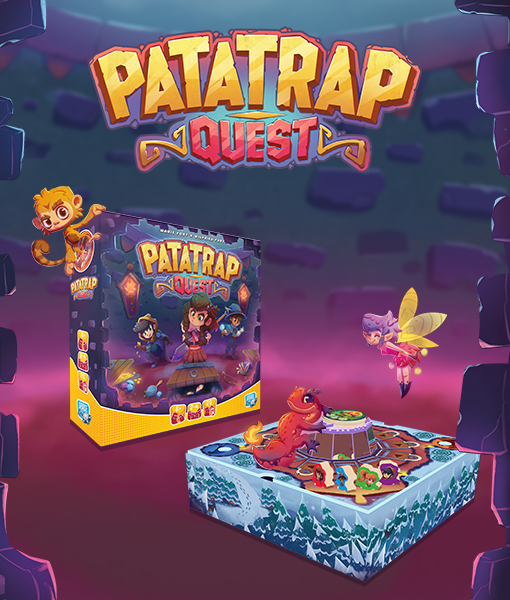 Patatrap Quest is a game for 2 to 4 players from 6 years old. Players become adventurers and must defeat the creature that has taken up residence at the top of the Tower of 1000 Mirrors in Patatrap Castle. Players investigate the castle's trap doors and equip themselves with weapons for the final confrontation. The game features 5 replayable adventures.

We produced the trailer for Space Cow, the children's label of Space Cowboys, from storyboard to final animation (excluding voiceover).
Video Trailer 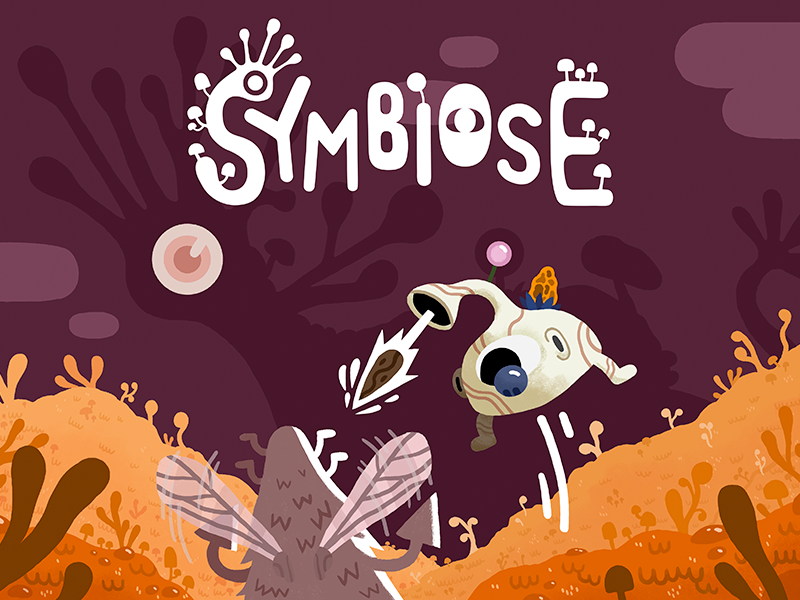 Symbiose is a platform and survival game in which you play as a small symbiote living in harmony inside a giant creature. You must survive dangerous vermin that have come to invade your friend the creature and its fate is directly linked to yours. Your senses are limited but you can count on your friend to lend you hers in order to protect her!

Symbiose is a prototype game created with the support of Pro Infirmis, the Swiss association for people with disabilities. We propose an original gameplay with the objective of exploring the theme of disability from a new perspective.

We worked on the design and production of the prototype. The partnership with our studio was initiated by Numerik Games.
Symbiose website
1 Player
1 Computer

Reigns: The Council is an asymmetric party game for 3-6 people about a monarch seeking harmony in their realm, and their advisors vying to influence them for their own goals. Reigns: The Council is the physical adaptation of the famous mobile game Reigns, developped by Nerial and published by Devolver Digital.

We worked in collaboration with Nerial (game creator) and The Crowdfunding Agency (communication manager). We designed and developped a new website dedicated to the party game and created visual assets (image and gifs) for their Kickstarter campaign.
Kickstarter 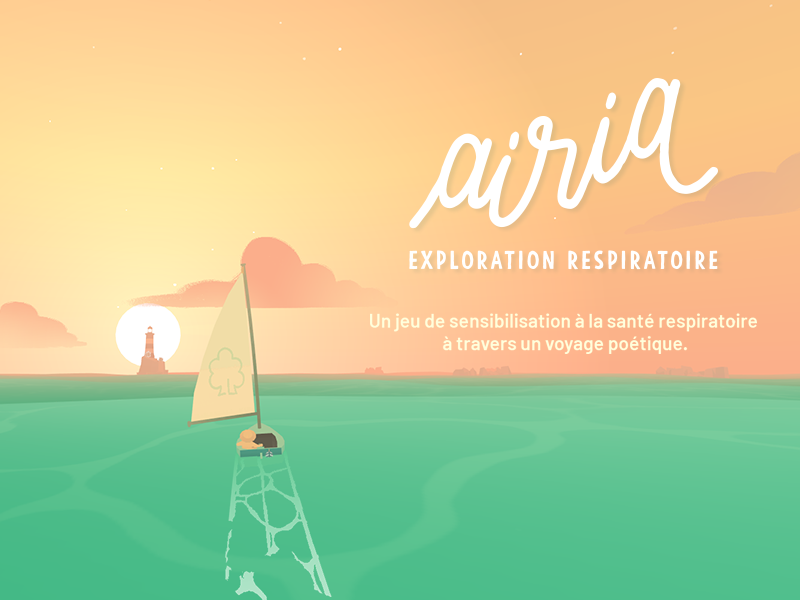 Airia is a game of respiratory health awareness through a poetic journey, in a new approach to public health information and prevention. The application is deliberately metaphorical in order to gently address the severity of some of the conditions considered.

By breathing, the players steer a small boat and are invited to discover, along different routes, messages - fragments of stories - that will lead them to lighthouses, symbolizing the main respiratory pathologies.

A logbook provides short information on each of the respiratory conditions and invites you to continue your search for information via the dedicated platform www.airia.ch

The game was made in collaboration with the LPGE (Geneva Lung League), we worked on the design and overall production of the game.
Download the app
1 Player
1 Smartphone 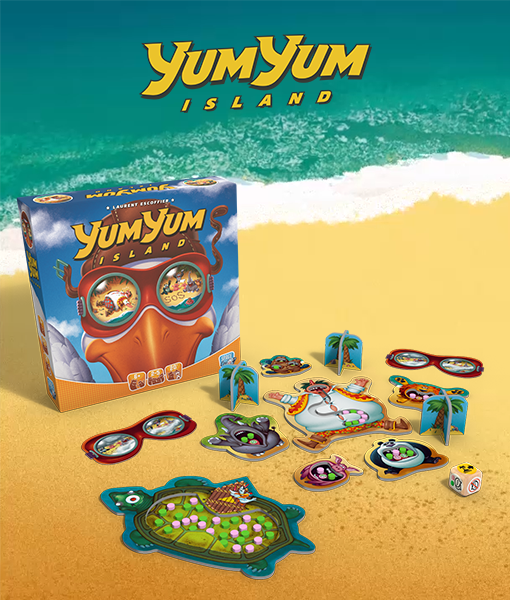 Yum Yum Island is a cooperative blind game for 2 to 5 players from 6 years old and up. Players play as pelicans and have to drop food to save animals from the awful giant Ferdinand.

We made for Space Cow, Space Cowboys' children's label, the trailer of the game: from the storyboard to the final animation (except voice-over).
Game's website 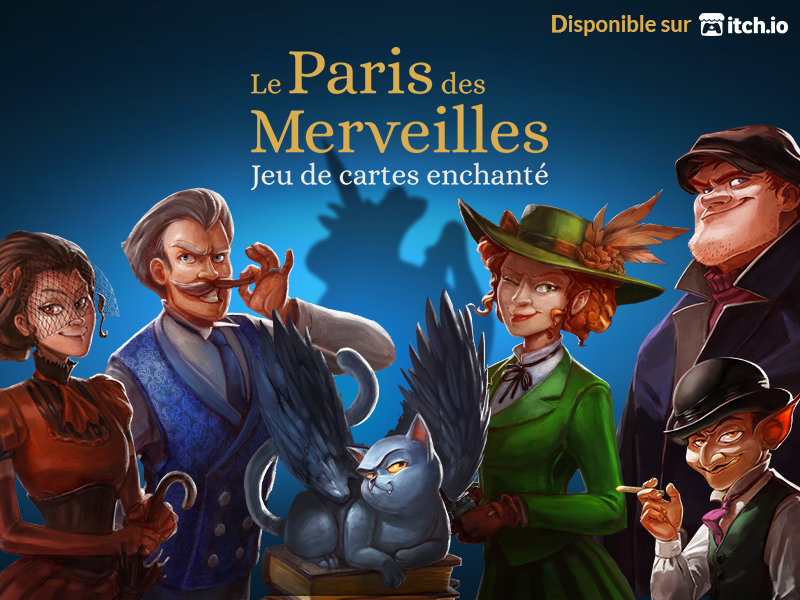 Paris des Merveilles - Enchanted card game is a digital card game freely inspired by the novel series of the same name. Play as the famous characters of the fantastic saga imagined by Pierre Pevel, fight fierce opponents using weapons, spells and enchanted objects in order to find the 7 crystal unicorns! This 1st version of the game offers an adventure with a deck of cards inspired by the 1st volume, "Les Enchantements d'Ambremer". Other adventures with new cards are planned and will follow the course of the saga. 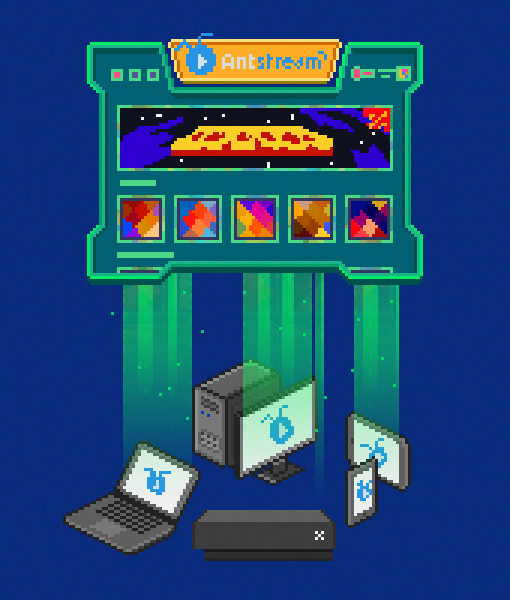 Antstream is a retro game streaming subscription service with a large choice of games. The plarform is available on PC, Mac, Xbox One, and mobile devices.

Antstream was funded on Kickstarter, we worked in collaboration with the team and ICO Partners (communication manager). We created the visual assets for their crowdfunding campaign.
Kickstarter 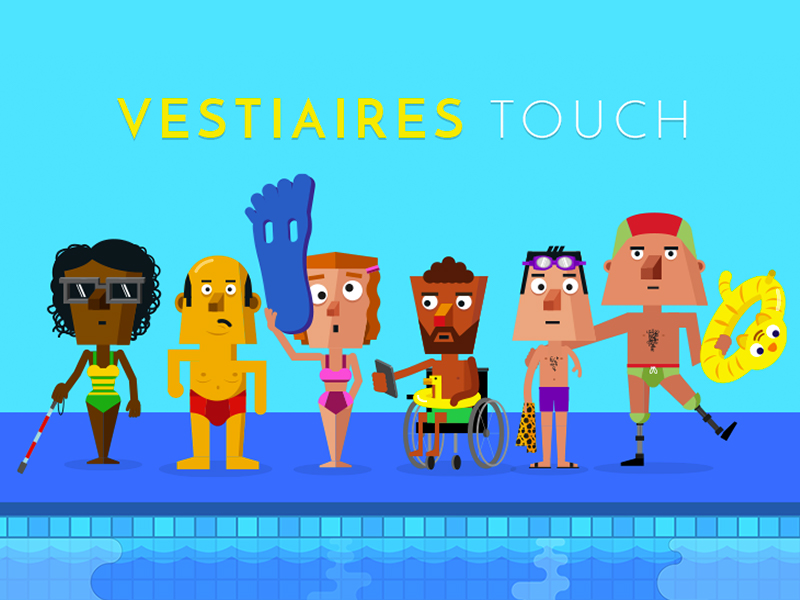 Vestiaires (Locker room) Touch is a mobile game adapted from the web series Vestaires. It tells the funny anecdotes of the daily life of a para-swimming team.

Players follow Caro, Delphine, Orson and Ramirez on the way to competition with 4 mini-games: arcade, reflexion and strategy. In the daily life of the disabled, every action can be a real achievement. Every mini game is inspired by the experience of this para-swimming team. Players help those champions to overcome the obstacles and win the competiton!

We worked in collaboration with VIRTU and Guillaumit. We produced the game design, programing, user interface design and animations.
Download the App
1 Player
1 Smartphone 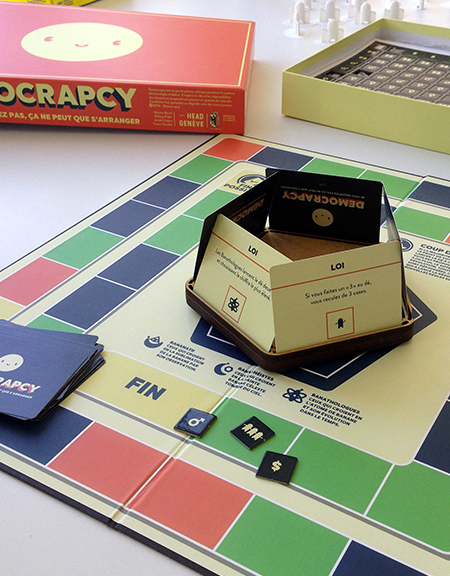 Don’t worry, it will only get better

Democrapcy is a satirical boardgame that challenges today's crisis of democracy. You play colourful members of a not so fictional community (stewardess, refugee, politician...), and vote for or against absurd laws to gain the upper hand over your opponents, the winner is the first to reach the end of the board. You can forge alliances with characters sharing common traits (social status, gender, religion), traits that can change along the game. But beware of traitors!

Democrapcy is a project designed and produced by Mélissa Pisler, Yoann Douillet et Israel Viadest. It is a co-production between the HEAD — Geneva school of Art and Design and the State Chancelery of Geneva. We worked as project manager and game design / art direction consultant.
Facebook
4 - 8 Players
1 Object 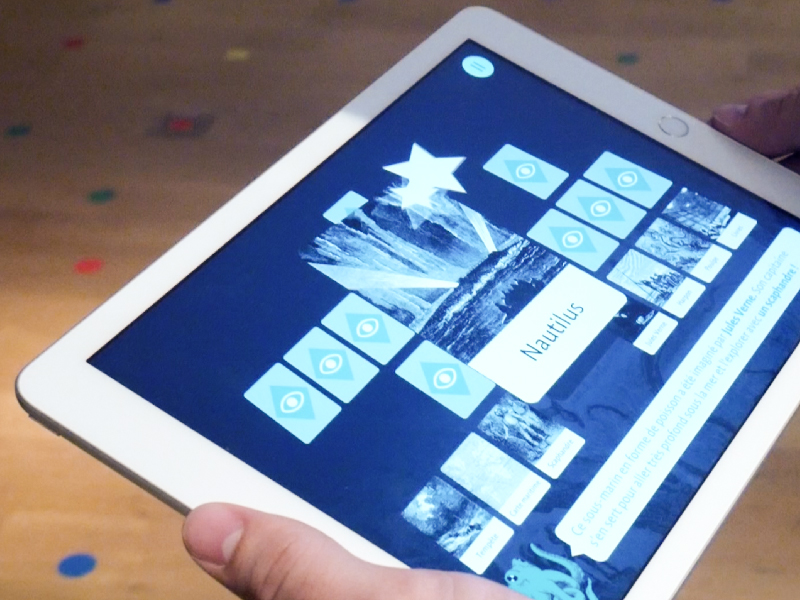 Creation of a museum game in situ

Games@museum is a mediation project for Swiss museums through games.
We worked with the Musée d'Ethnographie de Genève, who wishes to make their permanent collection more accessible to children from 8 yo and up. We also worked with the Maison d'Ailleurs in Yverdon-les-bains, to promote the collection of the Jules Verne room. We created a digital card game for tablets, playable in situ in these 2 museums and customized for their respective content. The goal of the game is to discover lost legends in the MEG and one of Jules Verne's stories in the eponymous room at the Maison d'Ailleurs. In both variants, the player is guided from display to display and must collect objects that are part of the story they are discovering. These objects are transformed into game cards, which must then be combined to find new ones, until the final card.

We worked with Aprobado for the development and Aurélien Mabilat for the illustrations.
1 Player
1 Tablet